Back
Lagos govt. works with NGOs, others to distribute stimulus package

The Lagos State Government says it has engaged no fewer than 4,000 registered Community Development Associations (CDAs), Non-Governmental Organisations and religious leaders to distribute the economic stimulus package unveiled for the indigent and most vulnerable in the society. 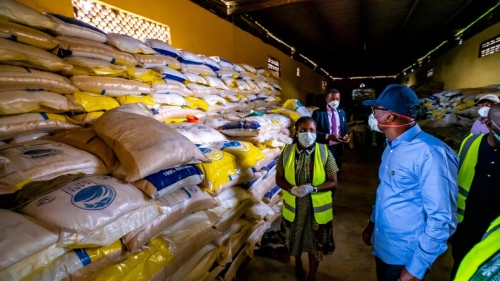 The stimulus, which comes in food packs to be distributed to every local government in the State, is aimed at cushioning the effects of the 14-day stay-at-home directive of the State Government.

The State Commissioner for Agriculture, Mr Gbolahan Lawal, according to a statement on Sunday in Lagos, said that the exercise began on Friday.

The commissioner said that the stimulus package, coupled with the flagging-off of the neighborhood food markets in 25 selected schools, would ameliorate the suffering that people might experience during the restriction.

He said that the stimulus was unique and different from those posted on social media, adding, that those of the state were sealed and branded.

“If you receive produce from any other source that is not branded, they are not from us. Our rice is the sealed 5kg rice. Garri is 5kg sealed and beans 3kg sealed.

”Other finished products are also coming such as sachet pepper, tomatoes and onions. That is what the state government is giving out.

“So far, six local governments have received packages. I want to assure Lagosians that if you are yet to get the relief package, they are on the way,” Lawal said.

He urged residents to exercise patience as the stimulus package would get to the targeted people.

Lawal also advised people to maintain social distancing and good personal hygiene to reduce the spread of coronavirus in the state.

“Again, it is important for us to let Lagosians know that social distancing is something we are advocating, people should relax, the food will get to them because we understand what the economic situation is.

“I am sure you are aware that 200,000 households have been earmarked and we are working with the CDA’s, NGO’s, organisations and councilors to ensure the package gets to indigent communities”, the Commissioner said.

He advised residents to act positively so that the chain of COVID-19 transmission could be broken.